Techtopia, a member of the Walltopia Group of companies announced the launch of a new product that solves the complex problem of safety in climbing gyms.

In theory, climbing walls and high ropes sessions should be the safest of all ‘adventurous’ activities. There should be no uncertainty of outcome beyond how far an individual will be able to climb. The environment is artificial and controlled, the equipment is well-engineered for the job and there are tried and tested autobelay systems available to protect all involved.

There seems to be an assumption that mechanical or technical failure is more common and more serious than human error. The opposite is true – accidents in climbing gyms are far more likely to be due to human error than mechanical failure. High-risk situations where a climber starts his ascend without having attached himself to an autobelay happen every day. Happily, accidents are rare but they should not really happen at all.

When designing operations and choosing equipment, we need to focus on reducing the possible negative impact of human factors. It is crucial that wherever possible, at every critical point in the system, there is some form of a double-check.

Techtopia’s team of high-tech engineers has created a system that is smarter than any of the existing belay supervision systems available. It relies on AI and incorporates the latest technology in image recognition into an all-seeing camera device that detects the movement of a human approaching the climbing wall, follows and analyzes his actions observing multiple points on his body, and sets off an alarm in case the human forgets to attach to the belaying system of the wall and trespasses a certain height or into a neighboring climbing route. Gym owners can set the zones and parameters they want to have observed and monitored. 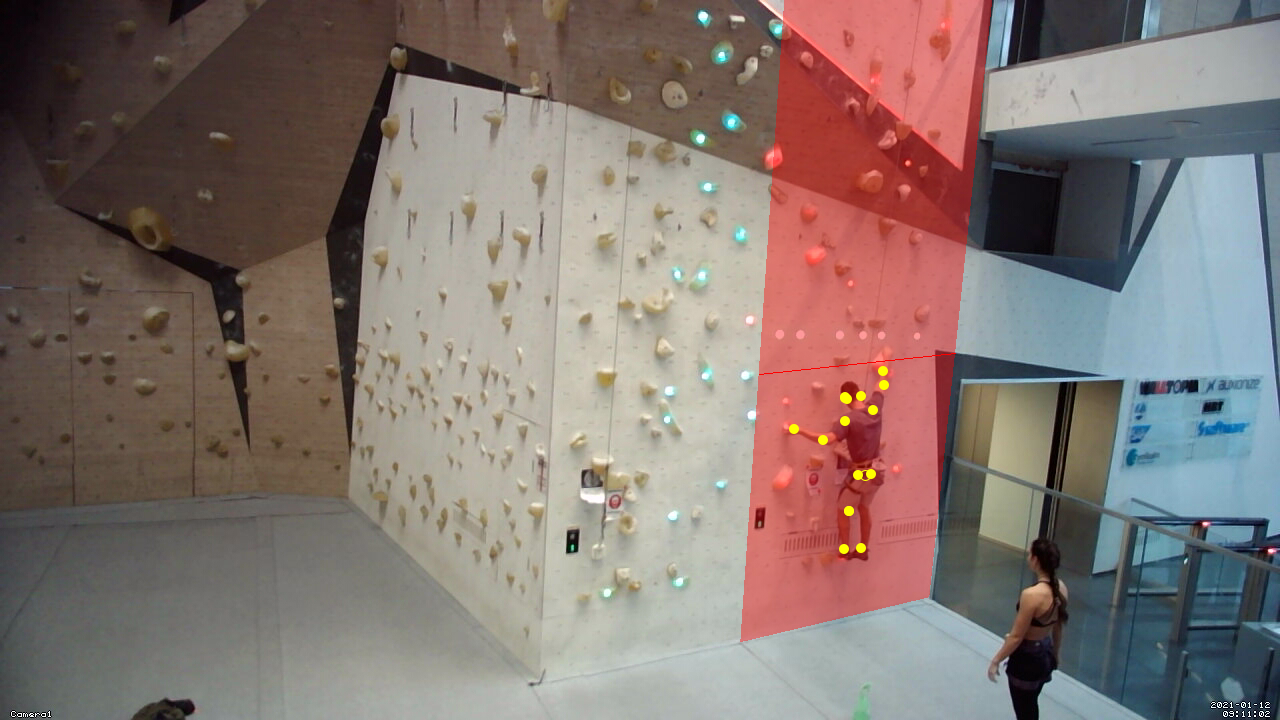 The name of the belay assurance camera system - a proprietary development of Techtopia, is Higher Eye. Its camera is highly durable and resistant to all challenges a climbing gym can pose upon it. Beyond its core function to alarm when a climber is not attached to an autobelay, the trained algorithms bring multiple additional features such as:

Higher Eye has also a high potential for future use preventing accidents on the streets - on crossroads or public transport stations and generally, everywhere video and image systems can be leveraged to prevent human mistakes that can be a matter of life.

We chose Walltopia because of the qualit …

Although we were a small project for the …

“We wanted to share a little bit more about our decision to use a professional wall building company and the process to do so. Walltopia is the industry leader and has built more climbing walls worldwide than anyone else. Although we were a small project for them they covered everything from architecture and design, to engineering and production, and offered us the experience and quality that we knew would give us the safest and most durable wall we could ask for. Their portfolio spoke for itself and the team they enlisted to help us through the process was second to none. We're proud to bring them to Hawaii and stoked to share a world-class climbing wall with all of you!! Stay tuned we'll be posting a bit more about the technical aspects of the wall and design.

They did fast, quality work, always with …

“ We are incredibly thankful for the effort that our Walltopia crew put into this gym. They did fast, quality work, always with a smile and were a pleasure to work with. We hope the Skopsko is going down smooth, boys! We'll see you in Rochester when you come back to climb on your handiwork... or maybe in Bulgaria?!

“Walltopia has made quick work of the structural steel for the tall climbing walls! Paneling will go up over the next few weeks. We're blown away by how quickly over 10,000 sq ft of climbing surface up to 50 ft tall can come together!

“These guys are part of the Walltopia crew that is assembling our climbing walls, and doing a dang fine job of it! They work long hours making these walls look good and making sure they're safe.

...you can be assured they will be AMAZI …

“Who are building our climbing walls? What will they look like? With a company like Walltopia you can be assured they will be AMAZING!

Walltopia is rocking this job from start …

“The walls Downtown are really coming together, and we couldn’t be more excited!
Walltopia is rocking this job from start to finish. It’s going to be a beautiful gym, and very, very FUN.

Thanks for your amazing and faultless se …

“You are part of the dream and the journey Walltopia! Thanks for your amazing and faultless services. Special thanks to Marina,Ani and Steve for helping the dream along! Love to the Walltopia Massif.

Thanks for your amazing and faultless se …

“You are part of the dream and the journey Walltopia! Thanks for your amazing and faultless services. Special thanks to Marina,Ani and Steve for helping the dream along! Love to the Walltopia Massif.

I just wanted to say how impressed I am …

“I was at Harrow yesterday. I just wanted to say how impressed I am with the Walltopia build. Great finish but also the components and skill that has gone into all the fabrication is fantastic. A few little issues but nothing unusual so far.

Walltopia has employees that are second …

“Walltopia has employees that are second to none. From the contracts to communication to sending people out to build, we've been NOTHING but impressed. And that means a lot since we've been working with contractors on various gym builds (and building our own ourselves) for a while.

“I'd like to thank Walltopia, the head office staff, Rob Parer and the crew here who assembled the wall for the fantastic job they did! We're really happy with it.

We give Walltopia our highest recommenda …

“When we started planning the gym, we considered all wall vendors. However, when we met with Yasen and the Waltopia team, we knew immediately that we had found the right partner to build a gym.

Funwalls has proven to be a fantastic ad …

“As the owner of more than one climbing gym, Funwalls have provided quick cash flow for the start up & assisted in filling a marketing gap we didn't know existed. The elements have also been an effective way to broaden our market segment that can seamlessly transition into our climbing gym business.

If you can dream it, they can build it.

“If you can dream it , they can build it .We needed a reliable wall company that would respect our budget, timeline without sacrificing the quality of the final product. We're incredibly pleased to be working with Walltopia once again for our third project in three years!

Walltopia Canada has been a great resour …

“Walltopia Canada has been a great resource for us to open and develop our climbing gym. Their service is first rate, and they always work hard to make everything right for us.

Our experience with Walltopia was terrif …

“Our experience with Walltopia was terrific. They were incredibly easy to work with, and their knowledge and experience really took a lot of the stress out of the process for us.

Yasen and Walltopia were great to work w …

“Yasen and Walltopia were great to work with.  They were professional from the beginning of the project to the very end.

Walltopia was consistently described to …

“ Walltopia was consistently described to us as the top wall vendor out there.  They lived up to and exceeded their reputation.

We thought going local would be better b …

THANKS - for the great work you all have …

“Dear WALLTOPIA-Team,
THANKS - for the great work you all have done, to create and build a fantastic climbing wall.