The Making of CopenHill – The Tallest Climbing Wall in the World 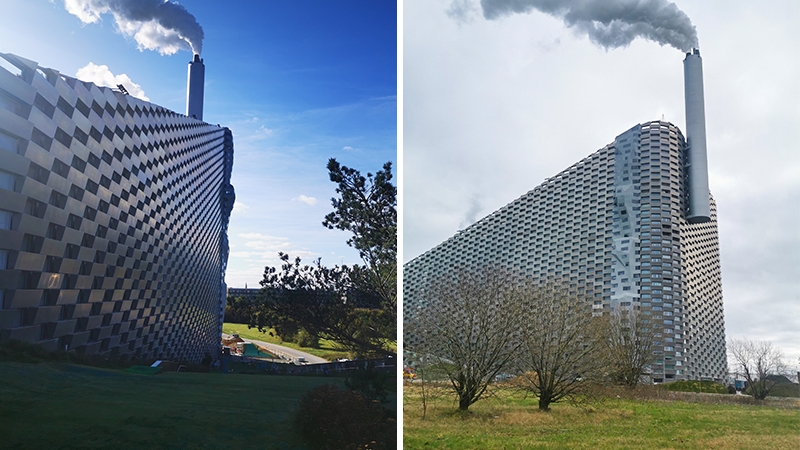 With its 80 meters, the outdoor climbing structure at CopenHill is the tallest climbing wall in the world. Designed, engineered, produced, assembled and route-set by Walltopia, we will take you through the process of creating the climbing monster.

“The wall design was a challenge as we were striving to find the right balance between appearance and functionality - the goal was to create appearance matching the impressive building architecture while designing wall topology that offers supreme climbing experience,” says Vasil Sharlanov who worked on the design.

Currently, Vasil is the head of sales at Walltopia. He’s also a talented architect and was previously Head of design at the company for over 5 years. When the CopenHill project started he was still in the design department and was leading the team on our side. Vasil worked along with the building architect and the local climbing community who have been involved throughout the whole process giving vital input for the wall design. We passed through many concepts until we managed to develop one that meets the aforementioned requirements.

“The building itself is designed by Bjarke Ingels and his architectural company BIG after winning an architectural design competition ordered by Amager Bakke Foundation. Bjarke is known a great visionary in architecture and this can certainly be seen in the unusual design of the Amager Power Plant (CopenHill). One of his initial ideas was to introduce climbing on the building facade and thus add more urban activities. Since this is quite a prominent and visible part of the building (you can see it all the way from the famous Little Mermaid statue in downtown Copenhagen), it was very important to make it right. When the power plant went under construction, the owners of the building, Amager, started a tender competition where all major climbing wall suppliers were invited. In addition to keeping everything in a preset budget, it was quite important to follow all design requirements from BIG and the Danish climbing community to create great features for climbing and also propose a working solution of how to actually build it, because it was never done before at this scale,“ Vasil adds.

From a technical point of view, it took a lot of effort, precision and attention to detail to perfectly match the raster of the building.

We had to both follow the unique pattern of the building with “bricks” and “openings” and also introduce specific climbing features, roofs, arretes, cracks and other fun to climb elements. Since the wall is 80m, it’s difficult to climb it at once, so it was split into 4 pitches, roughly every 20m. Every pitch has a different overall climbing level with the bottom being the easiest. Every pitch ends on a sloped edge which makes anchoring comfortable but also not a cozy place to hang out (you can’t sit and have a beer) in order to make sure climbers won’t block the lines for excessive time taking selfies from above. 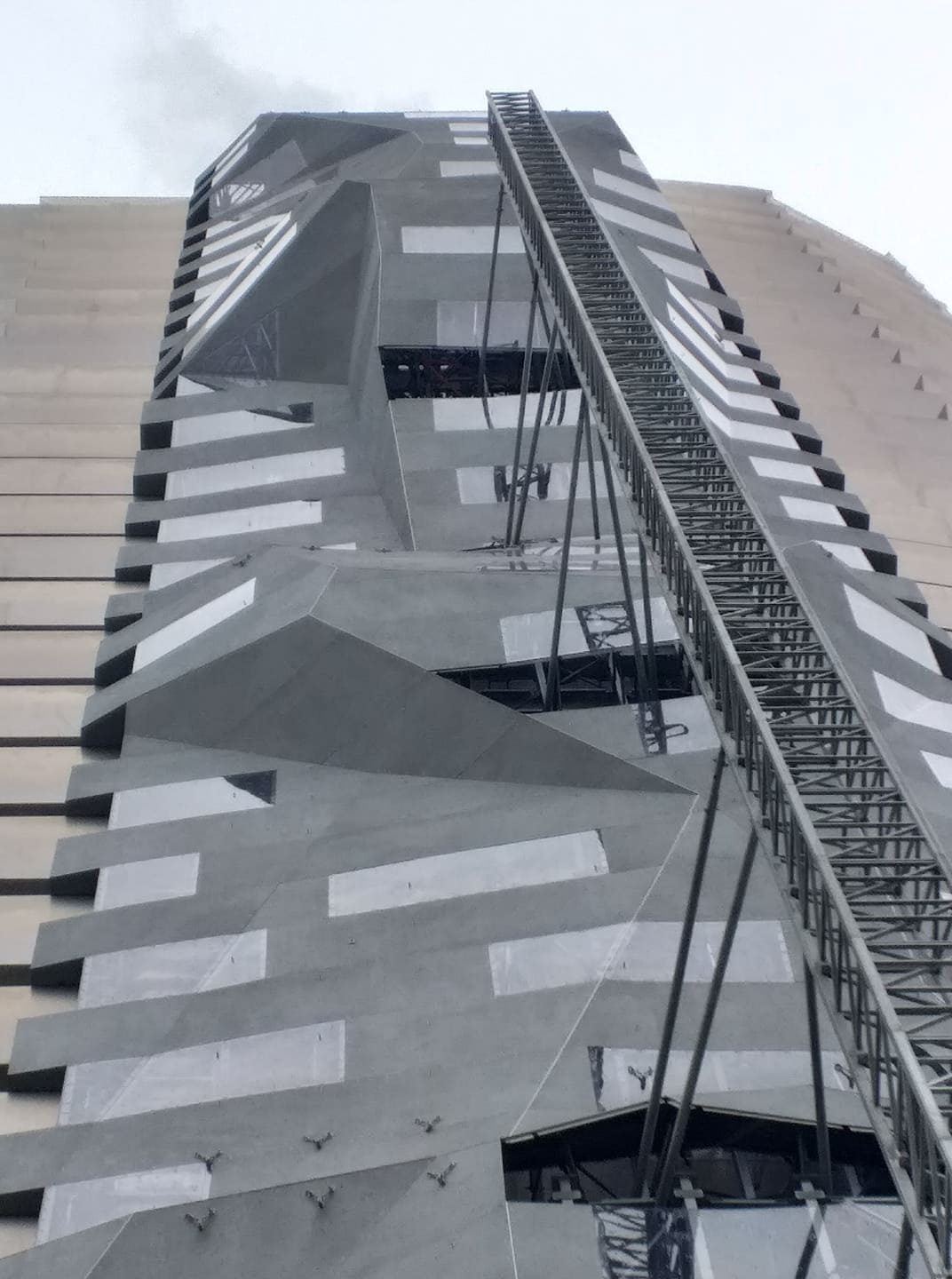 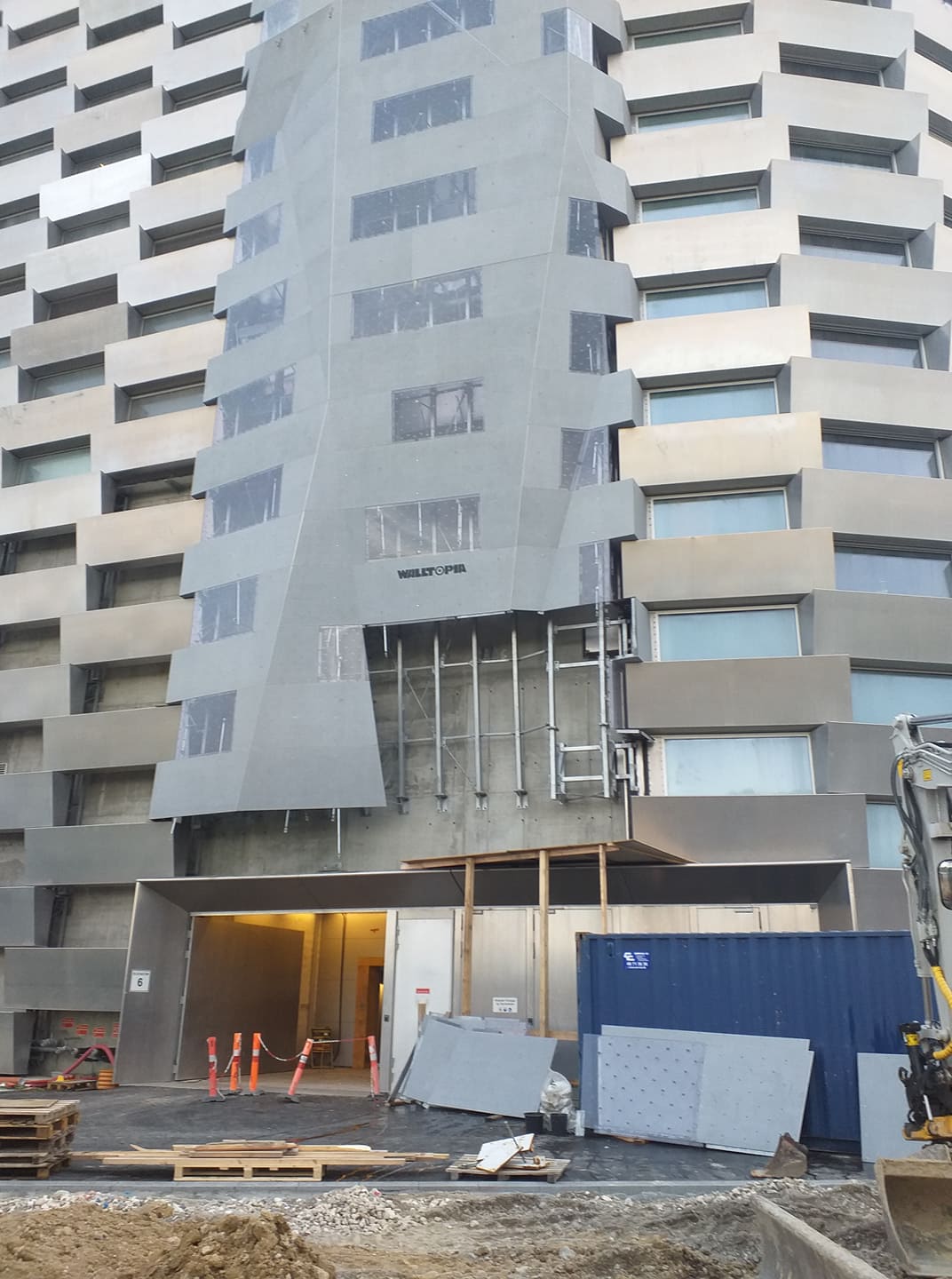 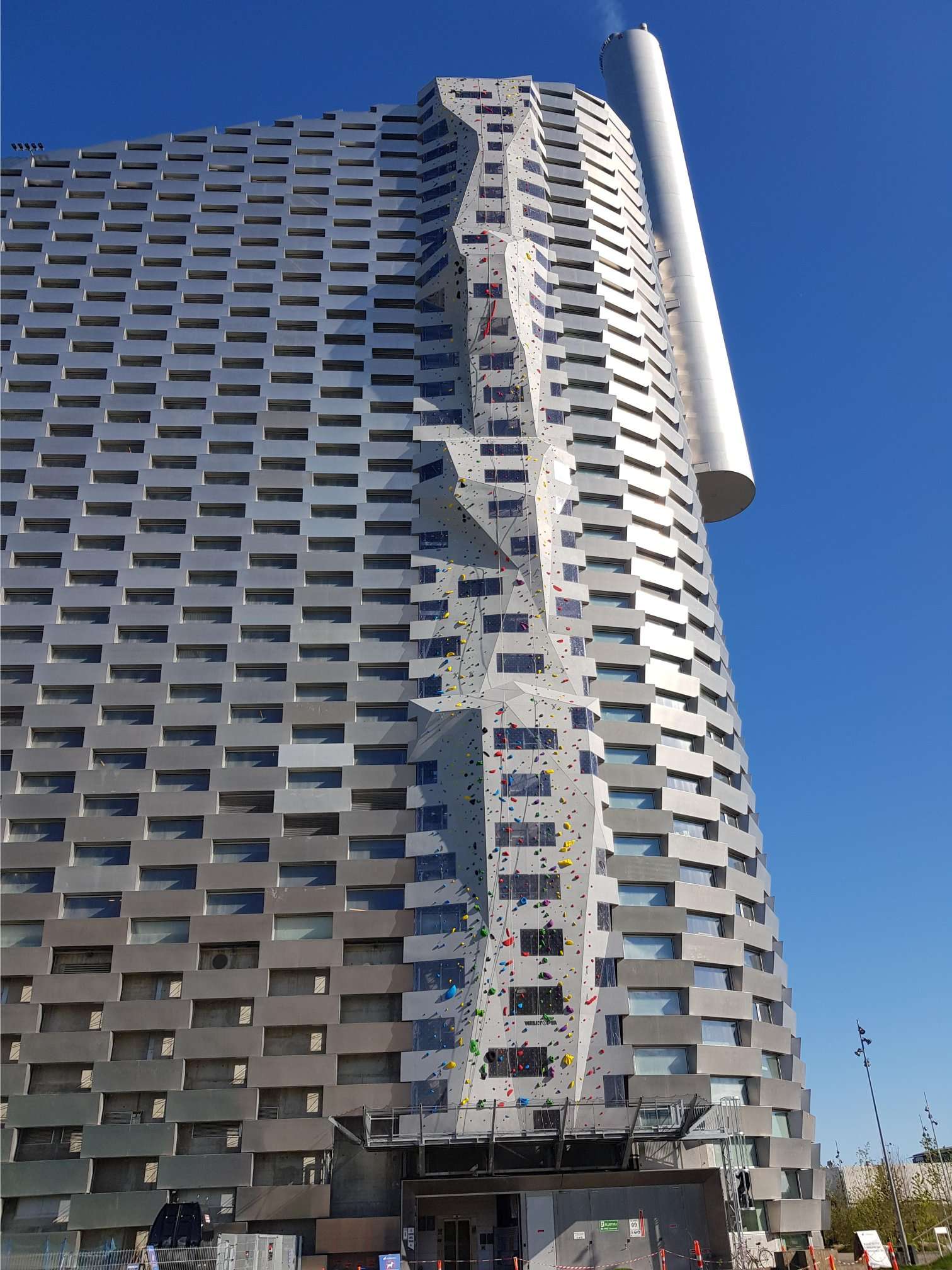 “It was inspired by natural multi-pitch routes-they usually use naturally formed ledges for pitch endings,” explains Vasil Sharlanov. Then each section is split into different grades on the 5 bolted lines to have maximum variety. The wall starts on a small platform above the ground level also to limit people from climbing on it without supervision.

Challenges emerged in terms of production and installation as well. As the goal was to match the building design visually and functionally, we didn’t want to obstruct natural light from coming into the building. Therefore we had to get creative with the materials using plexiglass on a scale bigger than ever in combination with fiberglass. We have used plexiglass before but usually, it’s a feature element for a very small part of the wall.

“Plexiglass is complex to work with, especially if you need to bend it, but thanks to the technological advancements we’ve been investing in at our factory and the skilled engineers at Walltopia, this was a problem that was easily solved.”, says Ivan Natov – project manager of the wall. “Screws cannot be used with plexiglass so all connections needed to be made with bolts and fasteners for which we had to pre-drill openings. This is a very precise job as you barely have any margin for error, in this case, it’s quite easier when you work with plywood and screws,” adds Ivan.

The rest of the 1200 sq.m / 12 916 sq.ft climbing surface is made entirely of fiberglass which is the most weatherproof material for climbing wall panels on the market. To make sure the wall sustains the harsh Scandinavian climate, the construction is made of hot dip galvanized steel.

55 tons of Bulgarian steel and 24 tons of fiberglass and plexiglass were hauled and mounted 80 m above the ground via a special platform – sort of an outdoor construction lift – mounted for the purpose and removed after. 8 Walltopians put their hard work and skills in weather conditions that are far from favorable – Copenhagen is a windy and cold place especially in the non-summer months. There were days that the platform was shaking so much due to the heavy winds that it was not even possible to lift it safely to the installation position.

Routesetting was also done by Walltopia but since wall construction finished in November and the winter doesn’t offer good climbing conditions anyway, we postponed it for the springtime. The assembly platform was not present anymore so the routesetting was done entirely using rope access. 80 m of rappels in the wind made that task, not a kids’ play, especially the first pitch when you have 60+m rope overhead that swings in the wind. Thanks to our amazing team, the job was done well and climbers can now enjoy this marvel in Copenhagen.

“There were numerous challenges and a lot of problem solving along the way but that’s what we enjoy and what we’re good at.”, says Ivan Natov